This month for Surprise Recipe Swap, my partner was Jaime from Mom’s Test Kitchen. I’m not new to Jaime’s blog – I made her Red Velvet Cream Cheese Swirl Cookies a couple months ago. Check out these Vanilla Pudding Snickerdoodles she posted yesterday. I’m a little upset I didn’t get to pick those, they look awesome.

I’m missing Mexico and vacation so I picked these Garlic Tequila Chicken Fajitas to make. Plus, we brought back some tequila from Mexico that I was ready to crack open. This is the first time I cooked chicken since October. I have enjoyed being a (mostly) vegetarian for the past six months but I think I’m ready to put chicken back into the regular rotation. Every once in awhile, at least.

Fajitas are typically served with peppers, but I don’t like green peppers so I used zucchini (which I love) instead. 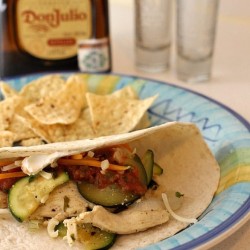