Home » Desserts » cake & pie » Yellow Cake with Fudge Frosting
This post may contain affiliate links meaning if you buy from them, I will make a few pennies, at no cost to you. See disclosure here.
Print Recipe

Yellow Cake with Fudge Frosting is a fluffy and moist yellow cake topped with a rich fudge frosting. I don’t know if you’ve noticed this, but I don’t often make cakes. I like cake, but because I don’t love frosting (either eating it or the act of frosting a cake), I usually opt for cookies.

The Mr. requested a yellow cake with chocolate frosting for our Superbowl party. When I do make a cake, it’s usually with a Duncan Hines mix. They’re good (real good), but I wanted to try one from scratch so I did some googling and decided to try this best birthday cake recipe from Smitten Kitchen and her fudge frosting.

I liked the cake. Alotalot. It was really moist and I could have probably eaten the whole thing plain. Then I went and frosted it and ruined it. In my frosting-hater opinion. But, that’s just me. You might love the frosting.

I cut the two round 9″ round cakes in half so it was a four layer cake. Ambitious for someone who doesn’t like to frost cakes. A trick I saw on a Canadian cooking show recently – stick two shish kabob sticks into your cake, lengthwise, so your knife stays steady as you’re cutting. Does that make sense? It would probably make more sense with a visual but I didn’t take a picture. Another tip – line your cake plate with strips of wax paper so when you’re done frosting, you can slide the paper out & have a clean cake plate. Ray Lewis is who I’m talking about. Not Ray my cat. He doesn’t like cake. 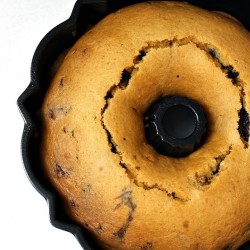 Adapted from Smitten Kitchen and frosting